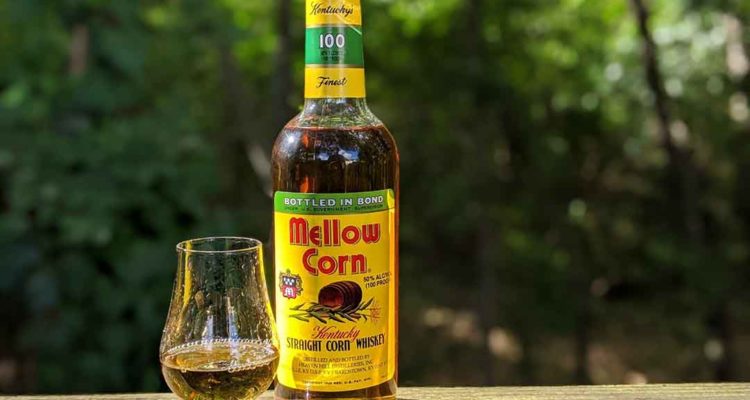 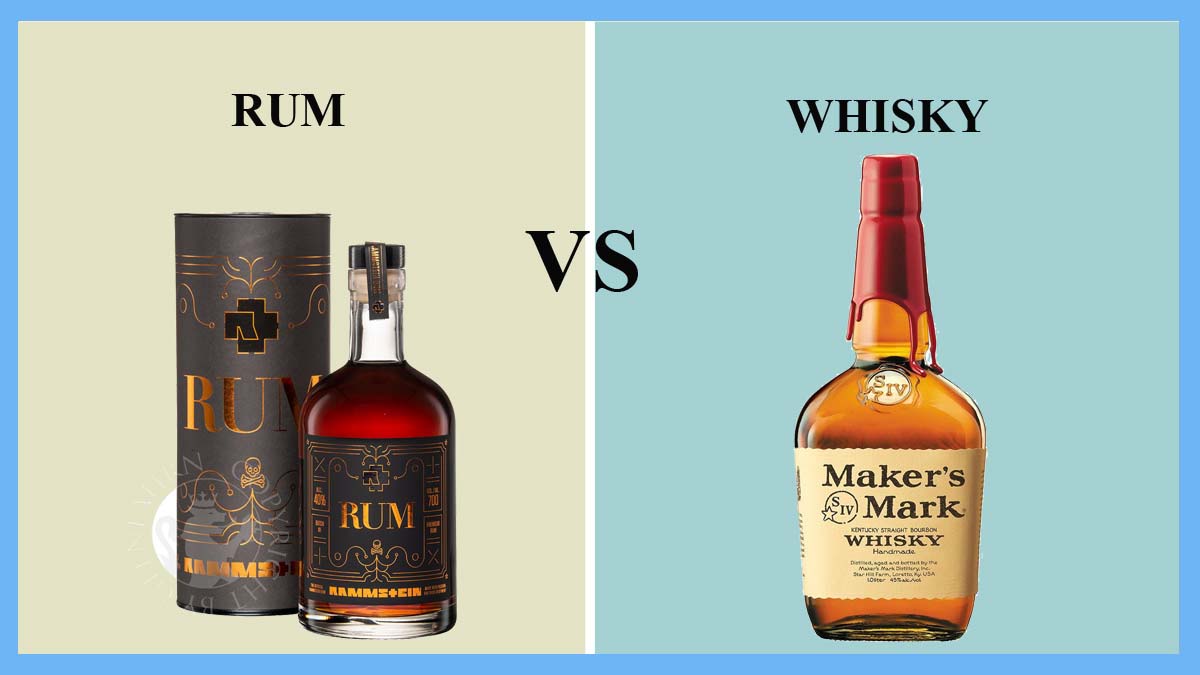 After a long and eventful day, you would want to take a glass of alcohol to calm and relax your mind. Different people have different tastes in alcoholic beverages, which they stick with them. Whether it is wine, whiskey, beer, gin, brandy, or vodka, many people have a specific response when asked about a drink they love.

If you ask a passionate beer lover how their favorite beverage is made, they might not even have an answer. Also, a person who loves whiskey might not understand what role oak trees perform in the whiskey-making process. 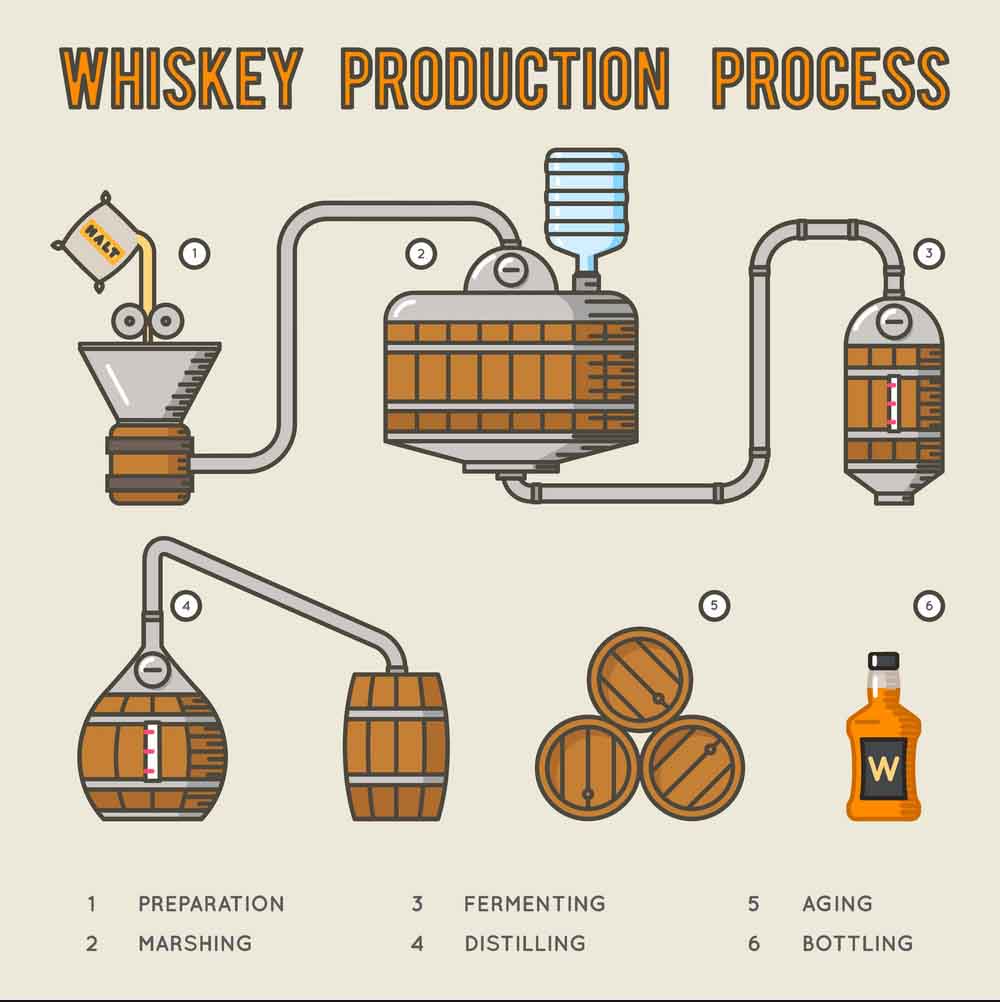 Before proceeding, you should note that alcohol consumption for persons under the age of 15-20 is prohibited, depending on your federal state law. Also, alcoholic drinks have zero calories. Therefore, they provide food energy and no other nutrients. Furthermore, alcoholic drinks are classified as anti-depressants because they impair brain activity by slowing down its functions.

For all lovers of alcohol, it is challenging to understand the differences between beverages clearly. We have compiled a list of differences between rum and whisky that will provide you with enough knowledge of whether you want to choose your favorite drink or learn more about them.

Whisky is a word translated from “uisge beathe” meaning “water of life.” whisky can be referred to as the most popular distilled spirit, with its medicinal and self-indulgent characteristics. If you wonder whether the correct spelling is whiskey or whiskey, both of them are correct. Whisky is a common spelling in New Zealand, Japan, Canada, and Scotland. On the other hand, most Americans and Irish spell whiskey with an e. however, most lovers of alcohol across the globe prefer spelling their whisky without an “e.” This article will use the whiskey spelling with an “e.”

Whiskey is made through distillation by using a mash of fermented grain. Different grains are used to make different types of whiskeys, such as corn, barley, wheat, and rye. Production is made from a post still while the wooden casks facilitate its storage for aging. 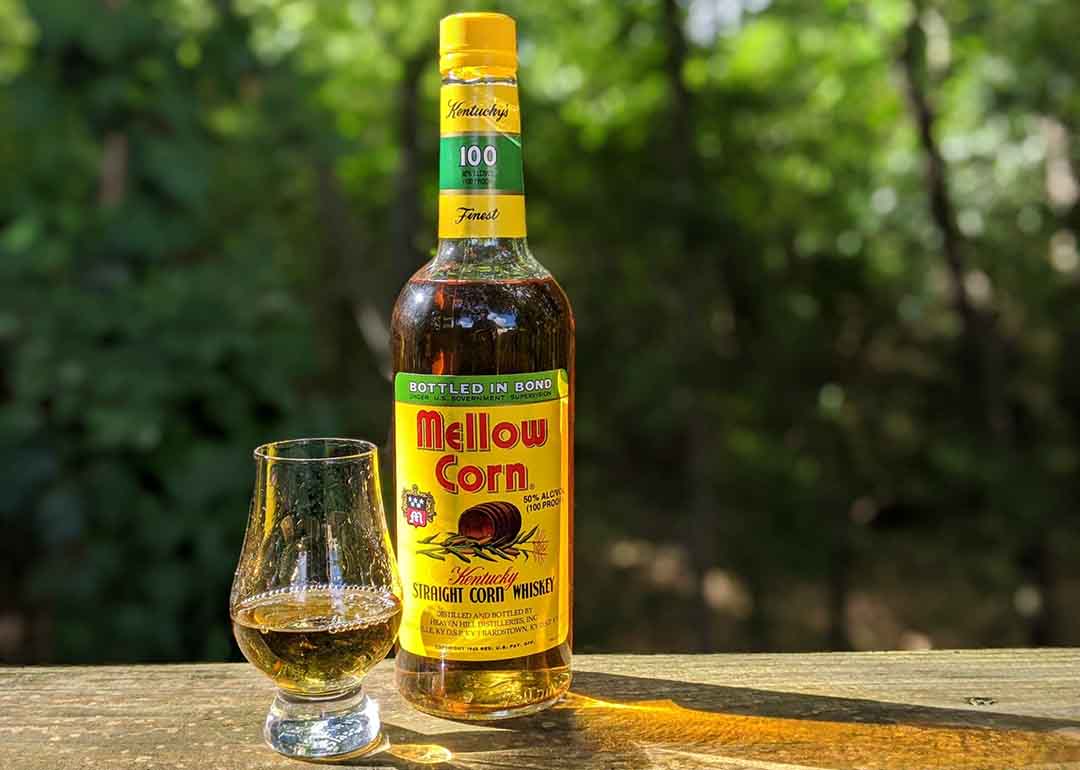 A pot still is a piece of equipment made of stainless steel or copper. It must be lined with copper material in either case. This is due to the fact that copper plays an important role in the manufacturing process. It purifies the alcohol by removing Sulphur-based toxins, making it more drinkable and flavorful.

Whiskey does not age in a bottled state like wine; its age depends on the time kept in a cask from the point of distillation to packaging in bottles. You would think that a 100-year-old whisky tastes magical. Paradoxically, after 10-20 years, extra aging does not change the taste of the whiskey at a significant level; it tends to change the developed flavors. 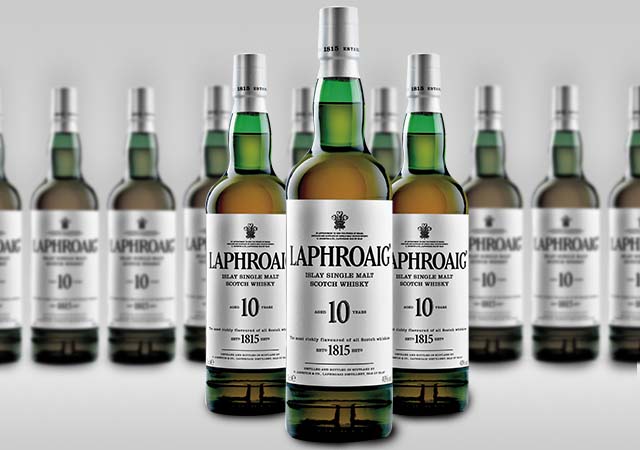 Whiskey is made mainly in Scotland. Key production points include the highlands, Campbell town, the lowlands, and the Isle of Islay. Also, each region produces a different profile of flavors. Another robust producer of whiskey is Canada. It is also a prominent exporter, with more than half of its whiskey being exported to the US. Typically, where there are more grains, more whiskey is produced.

There are various types of whisky depending on what it is made from and how it is manufactured. They include: 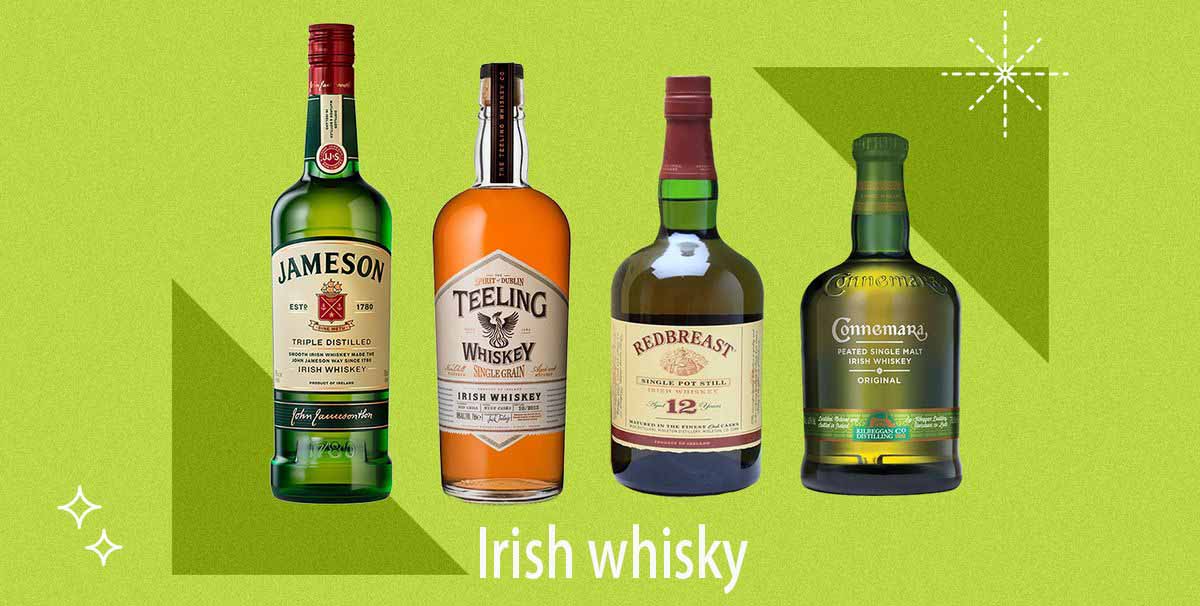 Rum is typically made from cane syrup, fermented sugarcane juice, or distilled molasses. It is a relatively new drink that was introduced in the 1600s by Caribbean colonists. Enslaved people who tasted the leftover molasses from a tray that had sat in the hot sun for a week were the first to discover it. Following that, enslaved people began to enjoy the concoction, and their masters began to improve techniques to improve their taste for export, a successful step that has existed for centuries. 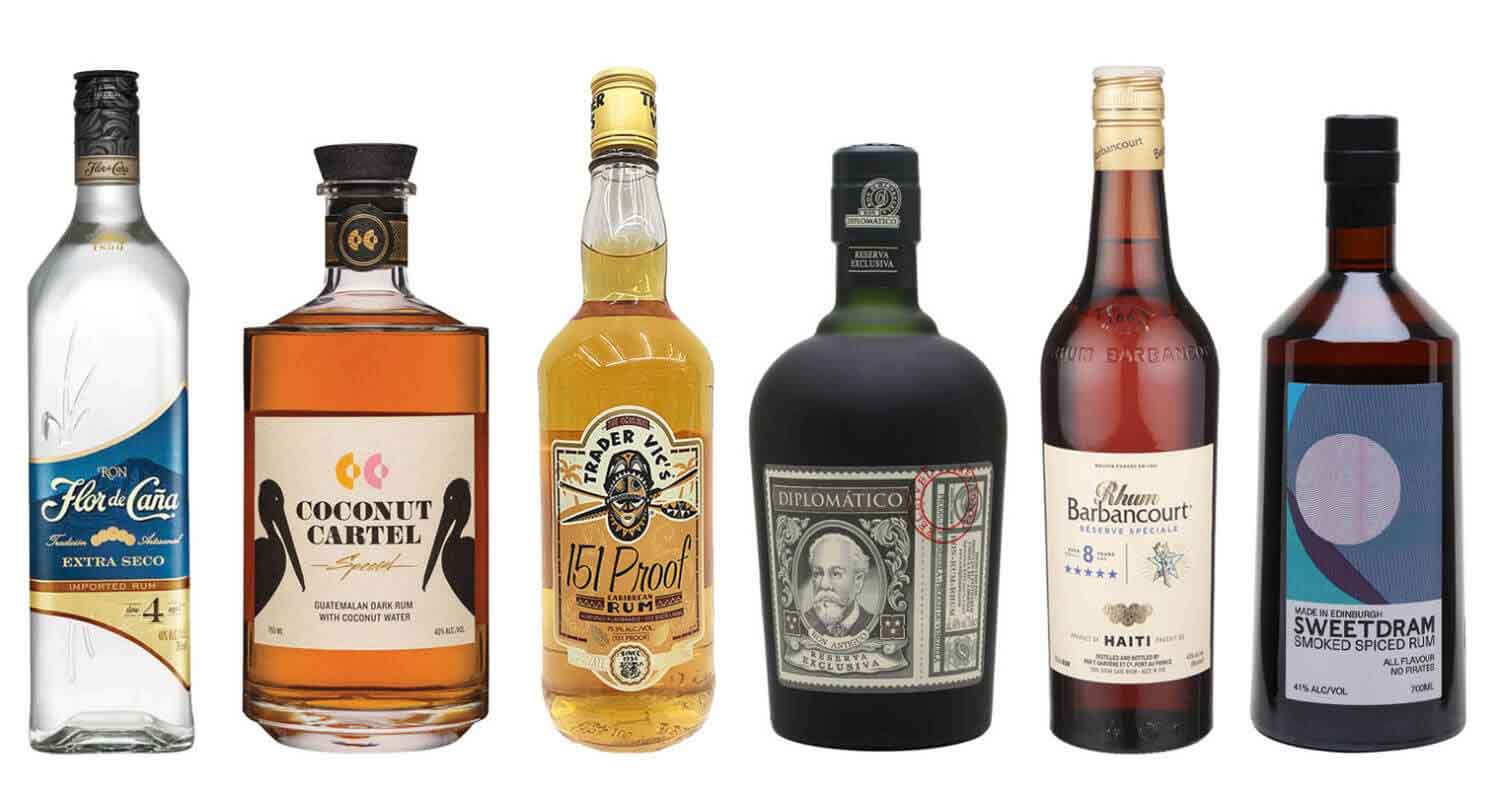 Making sugarcane-based rum is quite simple; it involves harvesting mature sugarcane stalks, extracting the juice, and distilling it. Conversely, in molasses-based rum, the sugarcane juice is first boiled and then transferred to pots or tanks, where it turns into molasses after the crystallization process then, the mixture is fermented for up to 3 weeks after adding yeast, some nutrients, and flavors.

To achieve the desired results, the next step is to double distilled in column stills or copper pots before blending and aging with other batches of different flavors. Rum can be aged in former scotch, bourbon, cognac, or sherry barrels to achieve the desired flavor. The longer rum is aged, the more flavorful it becomes (honey, vanilla, fruit, and tannins).

Rum is produced all over the world. However, some common manufacturers include or rum Puerto Rico, Jamaica, Bermuda, St. Lucia, Barbados, Dominican Republic, Nicaragua, St. Croix, and Guatemala. Every rum-producing area is popular for a specific cocktail, but Bermuda’s dark ‘n’ stormy is the most popular rum drink. It is typically made with dark rum, ginger, and beer, making it burst with flavors.

Some countries independently regulate their rum production. They indicate their style or origin on the bottle. Some of the most common styles include French rum, Jamaican rum, and cachaca. There are also different grades and variations of rum. They include;

Differences between Rum and Whiskey

The main disparities between the two beverages include;

According to history, rum was first discovered by the Caribbean enslaved people after realizing that molasses could be fermented to produce a mind relaxing drink. At the same time, some argue that rum was discovered in the West Indies in the mid-17th century and was referred to as “Rumbullion” or “Kill Devil” and later decided to name it rum. It was rationed regularly to British sailors until the 21st century.

On the contrary, whiskey originated from Ireland and Scotland when the monks taught them the process of distillation. They were originally used for medicinal values and an internal aesthetic and external antibiotic. The first created whiskey was grain-based.

The primary raw materials used in whiskey production are water, yeast, barley, or any other grains available. As a result, different types of whiskey are formed depending on what was used during production or where it was produced. They include scotch whiskey, malt, grain whiskeys, and Irish whiskeys, among others.

On the other hand, rum only needs a specific crucial ingredient: sugar cane juice. First, sugarcane juice is extracted from mature stalks and made into molasses. Then, it is used to produce both premium and light rum.

Although rum and whiskey go through a similar creation process, fermentation distillation and maturation, all rums are double distilled. When it comes to whiskeys, most of them go through single distillation apart from some like scotch whiskey, which is also double distilled. Notably, rum is double-distilled in copper pots or column stills. They attain the desired flavor and then stay in the charred oak barrels for aging.

During the aging forces of rum, they are infused with different spices like cinnamon, vanilla, ginger, and peppercorns. The flavors are added after storing in the oak barrels, where they age for the desired period to lend with molecules of sugar. Whiskeys are also spiced for flavoring purposes.

The difference between the two drinks is that whiskey heavily depends on flavoring to acquire its taste. This is because it is made from grains like malt and barley, which are plain and need additional ingredients for taste enhancement. This aspect also makes whiskies have a range of flavors. On the other hand, Rum has a generally sweet taste since it is made from sugarcane juice.

In both drinks, the color depends on the used ingredients during the making process. Rum usually has to be distilled multiple times, resulting in its golden color. However, some types are clear or white due to the carbon filter processing.

On the contrary, whiskey has a dark brown color clear touch of brown. The material of the highest quality produces the clearest whiskeys.

They acquire their alcohol content during storage in the charred wooden barrels, whether it is dark rum or white rum. After that, they are bottled at 40 percent alcohol content. On the other hand, the alcohol content of whiskey drinks varies depending on their type and where they are manufactured, ranging from 40 percent to 60 percent. 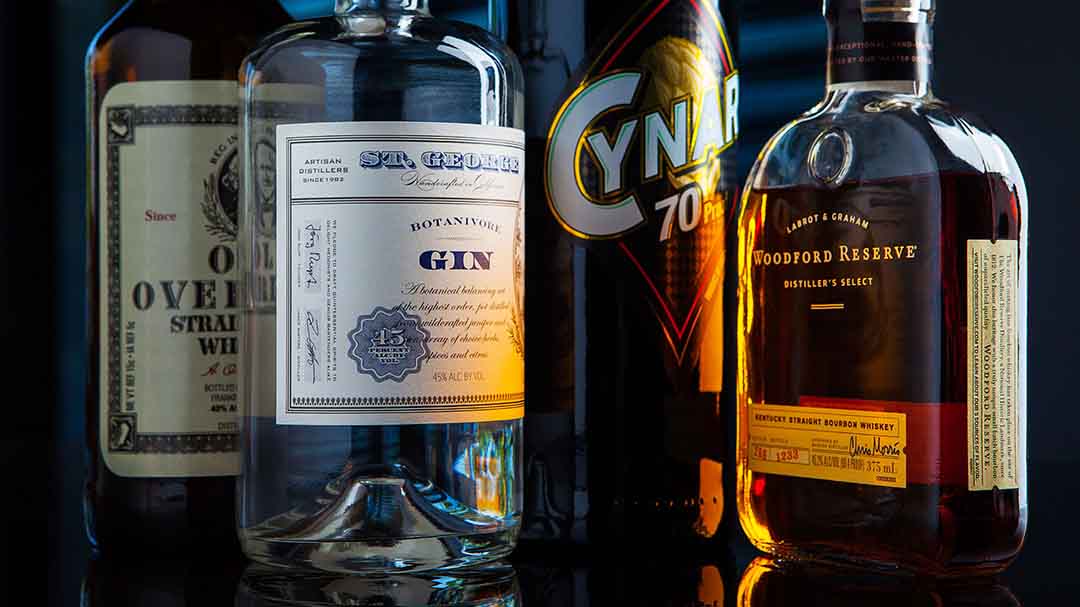 Whisky, when consumed in moderation, has the ability to regulate blood sugar levels in the body. The blended or straight bourbon whiskey is an example of a whisky that can control glucose levels. When it comes to rum, drinking its white or premium varieties can help relieve muscle and nerve pains and general body aches. Moderate consumption of rum may also reduce the chances of developing arthritis, though science has yet to prove it.

Whiskey is more popular than rum in general.

This is based on sales data.

This is due to its classic flavor, which is derived from the contribution of white oak barrels and the casks in which the beverages are stored. Several types of whiskey casks are available, including wooden, double wood, and oak barrels used to store sherry wines. Their strength and flavor enhance the flavor of the whiskey. It makes people want it more than the rum aged in single casks.

Although rum has a sweeter taste than whiskey, most people who enjoy it claim that, despite its low price, the flavor is not compromised; just a small sip gives you more flavor. On the other hand, the grains used to make whiskey have a simple flavor and take on the flavor of the wooden barrel during aging. This makes it an excellent mixer because it enhances the flavor of other drinks.

Rum has a lower price compared to whiskey because its production is much cheaper. The most expensive rum is about $2, the Caribbean islands. Whiskey is way expensive, with some of the expensive brands costing up to $2000. Some are even very expensive to the extent that they are sold in auctions. Whiskey made from normal grain is aged in white oak barrels and becomes flavorful bourbon with a matching price tag.

Since we already understand that rum is made from sugarcane and molasses while whiskey is made from grains, It is important to discuss an interesting phenomenon that occurs in India. Most Indian premium whiskies are molasses-based, while some whiskey brands mix it with rum to create a more affordable blended whiskey, Thus, compromising the quality of its whiskies. Examples of such whiskey brands include Mc. Dowell’s No 1, the Royal challenge, Director special, and officer’s choice.

To sum up the contents of this article, content briefly, everyone has their own choice and preference when it comes to the selection of their favorite drink. The same case applies to rum and whiskies. This article has given you most of the information that you need to know about rum and whiskey. We have highlighted some of the differences between whiskey and rum that might enhance your decision, whether you are a drinker or just curious to learn more about alcohol and how they are made. One of the key differences between rum and whisky is in regards to how they are made. Rum is made from sugarcane juice, while whiskey is made from grains like barley, wheat, corn, and malt.

Another key difference lies in how the two beverages taste. While rum is generally sweet as it is manufactured from sugarcane or molasses, whiskey has a range of tastes depending on the casks used to store them foraging. Other sources of differences include their origin, value and prices, mixers, alcohol content, health implications, alcohol content, and the ingredients used while making. I hope these differences will make it easier for you to select your most preferred drink with confidence because it equips you with crucial knowledge.

Hello, everyone. It is a good news! We will attend the World Food MOSCOW on…

As we can see in our daily life, glass bottles are very common. It’s an…

All eyes are now upon RS Bottles, as they are now being ranked as the…