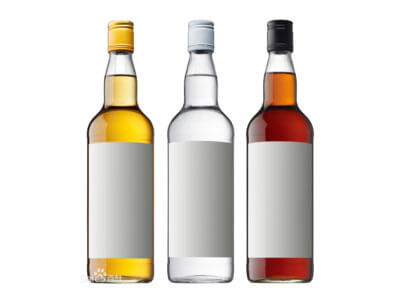 Liquor is an alcoholic universal popular drinks for one thousand years, it is associated with human’s daily life and in the long five thousand years civilization of the world, wine brewing a long stream, but the origin of the liquor whether in when and where is an interesting and complicated problem, but one thing indisputable fact is for sure, liquor before human beings exist objectively. With the advent of liquor, glass wine bottles began to develop.

Fermented wine is mainly refers to the liquor-making raw materials is microbial saccharifying fermentation or directly through yeast fermentation, using squeeze filtration or with their juice after fermentation for shows the natural fermentation of wine alcohol content is relatively low, generally around 3% to 18%, which in addition to alcohol and there are many vitamins minerals, organic acid nutrients such as amino acid peptide with beer and wine fermented wines among them the most famous.

Distilled spirits refers to the raw material was brewing microorganisms, after saccharification or directly by yeast fermentation of fermentation liquid with special distillation apparatus distillation again get wine, and after special storage modulation after blending drinking wine, this wine alcohol for relative fermented alcohol content is higher, up to more than 90% (column: the former Soviet union vodka, gin in the United States, such as the strong wine many are several distillation), there are also some low-alcohol wine out of alcohol in the 28% to 38% of wine and a small amount of easy and ferment aldehyde acid ester is the fragrance of different combinations Note: this wine contains virtually no essential nutrients.

Assembled alcoholic drinks we common have: medicated wine health wine cocktail and so on.

Wine bottle is a container for holding wine

Wine bottles were mostly presented to the world in simple patterns of “soy sauce bottle” glass material with less information and less decoration. For thousands of years, the material of wine bottles has changed, mainly according to the production process and technology.

The wine bottle material is more and more diversified, has the gold plating, the copper plating, the iron, the tin, the stainless steel, the pottery, the purple sand, the porcelain, the wood, the bamboo, the glass, the ox horn, the bakelite and so on each kind of material bottle material shows the respective characteristic and the style some is gorgeous and precious, some is solemn and generous, still has the light body. Common wine bottles are ceramic bottles, glass bottles, plastic bottles, etc., of which ceramic bottles are particularly popular.

Liquor is a solvent with a strong reaction ability to metals such as lead and aluminum, so it should be avoided to introduce these substances, using lead-free glass and lead-free ceramic folding editing process.

For many collectors, on the one hand, collecting is a way of investment, on the other hand, it also brings to collectors the enjoyment of the culture and connotation of the bottle itself may not be valuable, but if given a certain historical or cultural significance, it will enhance its collection value.

Bottle collection, from the variety, there is a single bottle to bottle set bottle series bottles (more than three); Look from material qualitative, give priority to with pottery and porcelain purple arenaceous, still have the melon of the bamboo of metallic glass wood; From the capacity, the large can hold 5000 milliliters small can only hold 50 milliliters; From the morphology, there are figures, animals, plants, vehicles, military weapons, etc.

The collection of craft bottles needs to pay attention to the following aspects:

Complete glass craft bottle bottle includes bottle body cap bottle label, some winery USES one-time anticounterfeit cap, after the cap is opened because of its destruction and throw away, the collector should close the cap and joint after opening the cap.

How Many Ounces (Oz) are in a Bottle of Wine?

Do you want to know how many oz in a bottle of wine? There Are…

Glass bottles are sustainable, do not let the chemicals leach into the substance inside the…

Introduction Are you searching for reliable glass bottle manufacturers in Nigeria? Well, Nigeria has numerous…